I bought an Air Hogs Areo Ace Mini RC Airplane a while back and it is still as fun as it was 2 months ago. The cost around $30 and come in 3 models (Biplane, Jet, Monoplane) ,a few color variations, and 3 different channels (A,B,C) so you can fly up to 3 individual planes at once (although one guy claims to have flown 8 on one channel o_o). They are nearly indestructible, they fly for around 10-15 minutes and take about a half-hour to charge (LIPO battery internal, requires 6 AA’s though). I’ve not flown multiple planes together but it sounds like it would be awesome. Did I mention a retarded monkey could fly these things with ease?

I’ve flown the Biplane and the Jet.

The Biplane is the easiest to fly by far. You can throw it by the the wing like a Frisbee and it will still stablize and keep flying. It’s stability costs it speed though. It’s easy to keep track of cause it’s so slow but it lacks the ability to make headway in an aggressive breeze.

The Jet is much faster and better for precise control for flying through obstacles but it takes more skill to do so. It seems to like the wind and can make headway through it.

I’ve not flown the Monoplane but I here that they are the best of both worlds.

Believe me guys, these things are fun at any age. My kid brothers like to throw stuff to them when I’m flying yet I don’t mind cause their basically invisible and they don’t hit it hardly ever. You basically need a large room or a small yard to fly these in.

Air hogs’ costumer care is very very good as well. My biplanes starboard (right side if you are sitting in the cockpit facing forward) motor developed a problem, so they had me tear off the tale and e-mail them a photo of it. Then they sent me a brand new one (the Jet).

Today I saw a Mini Storm Launcher which can go in the water, on land, and in the air in a discount store. 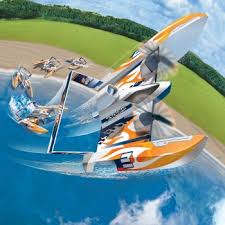 One of the props was broken so I called Airhogs to ask how much a replacement woulds cost. It would be $9 total to get a set to me and the plane was $20 at thats store. It is $50 brand new at Wal-Mart so I was about to order the props and buy the plane when the Rep on the phone asked me how many planes I’ve bought from them. When I said a couple of items he told we that he would send me a BRAND NEW MINI STORM LAUNCHER FOR FREE ($50 retail) as a gesture of gratitude for being a loyal costumer! I almost fell off my feet >_>