So…It’s about time a good DS FPS is in the works.
Behold, Moon, the first DS game I’m actually excited about. Except maybe Contra 4, but that’s in the past. 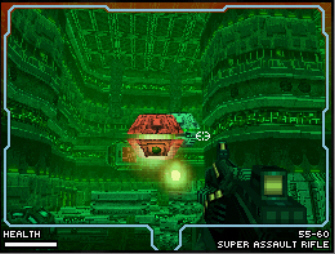 Never heard of it.

Looks better than any 64 game I’ve ever played…except those with the enhanced graphics processor.

yeah, it’s a DS game, why don’t they give DS-screen sized screenshots?

Well, the bottom one is a DS-sized shot.

I’ll have to wait and see how the gameplay actually is. lol

Oh, but do you get a toaster?

but did you get a chef?

lol i brought it to school today for one of my classes (we’re reading the odyessy) and that was a mistake. was left with about a square inch of it left D:

oh well i have plenty of spare ingredients left

But on the subject of the game, all the green in some areas on the shots reminds me too much of Daikatana.

Looking at the gameplay trailers now, the graphics are actually more reminiscent of Quake 2, maybe a little more like Quake with some alpha effects added for mild lighting. Not that they aren’t bad at all. I thought the same of MPH when I played it.

I love the music style though.