Speaking to CVG, Nintendo has confirmed that the company “is not making the 2D Metroid at this point in time.” Metroid Dread for DS showed up on a Nintendo pre-E3 list in 2005 but never materialized after that. The wording does leave room for a three-dimensional title, but instead of getting our hopes up, we’re just going to call this one dead.

Just thought i would post for People who didn’t know.

‘METROID DREAD IS DEAD’ IS DEAD!
Seriously, this came out, like 2 days after the scan…

They maybe making it, but I don’t know there have been some game that said were cancelled then it showed up on store selves, Maybe Nintendo is having a hard time trying to design Metroid Dread and get the story for it.

Wow, that’s a bump.
I don’t think they are, I’ve lost all faith in Nintendo knowing what metroid even is anymore, after prime 3.
I doubt Nintendo’s legions of design specialists could have a hard time designing anything, and storyline…? Please god no.

Wow, that’s a bump.
I don’t think they are, I’ve lost all faith in Nintendo knowing what metroid even is anymore, after prime 3.
I doubt Nintendo’s legions of design specialists could have a hard time designing anything, and storyline…? Please god no.

What I really want to see is what comes after Super metroid. Im sure Sylux will probably be killed in the game after Prime 3 (since that’s OBVIOUSLY HIS SHIP!@!!@!!!) but I’d like to see Weavel and Kanden make appearances later in the series so that the prime series doesnt feel so fictional in within the series.

…I was under the impression that they all died at the end of Hunters.
However, I feel that I should mention it COULD be his ship slightly modified and such… or greatly modified.

And yes, it COULD be, but it’d have to be heavily redesigned, to the point where it’s just as likely anyone else’s.

QTF
If you got the good ending, you see them fly away. If not you just see the station explode. So yea, they left it open like they pretty much always do.

Edit: It may not be the original, but that ship definitely haves Sylux’s color scheme.

All us Metroid fans have is a poor Cliffhanger that doesn’t help us with anything, as that damn ship can be ANYONES at this point… And If I’m not mistaken. I believe one of the nintendo Officials said something similar to, “We plan on even making spin off games for some of the Metroid Hunters characters…”

Maybe they weren’t kidding? I personally wouldn’t mind a MPH2 as long as it were almost all Multiplayer, or had an acceptable single player experience. I shall try and find proof of this later, I must rest now.

QTF
If you got the good ending, you see them fly away. If not you just see the station explode. So yea, they left it open like they pretty much always do.

Edit: It may not be the original, but that ship definitely haves Sylux’s color scheme.

I’ve seen enough debates on the topic and talked to Troid92 about it enough to confirm the colors. >_> Though I might be misremembering the specifics, they’re definitely not the same any more than “blue and green”–very different shades of blue and green. And yes, they both have four wings, but they’re differently shaped and angled. The cockpits are different. The line patterns are different. There is absolutely no reason to say it’s him beyond “it looks vaguely like his ship in the most basic ways”.

Yes, it might be his ship. It just as likely might be anyone else’s in the galaxy. It is not “obviously” anything. While it is true that Retro redesigns things a lot, when there’s nothing to go on except for the design–not a single minute piece of evidence anywhere in the game–and the design isn’t even that close, it’s foolish to assert anything about the pilot’s identity at all.

Doesn’t look like sylux’s ship to me, though it looks pretty fast, so maybe we have seen them before.

The “mystery ship” at the end of Metroid Prime 3. 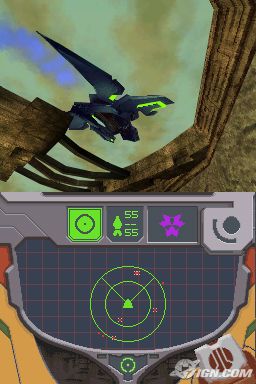 The ship at the end of MP3 IS the Delano 7. No doubt.
Will somebody pull the model from the MPH ROM?

Um… not so much without a doubt. That’s the first time I’ve seen the ship, but it doesn’t look the same to me. The back “fins” look completely different; similar to wings in Hunters, and the ones on the back of the one from MP3 look exactly like the front. Hunters is longer in the front, while MP3 it looks like equal lengths on both ends. The top side of the ship is thin and longer, and the cockpit is forward, between the front wings. The MP3 one is more dome like, and it looks like the cockpit is behind the front wings, but I can’t tell from that angle. Hunters front wings look more blade-like, MP3 front wings look more like… a stretchy S.
The wings move in the same general motion when expanding, and the colors are vaguely similar. That’s… about all the similarities I can find.

Great comparison at about 1:13, although the color of the MP3 ship has been edited and green lines added.

Troid92 ripped the model from Hunters a while ago, though he’s offline now and I no longer have the comparison image–but they are clearly very dissimilar.

Even without it, I know it looks dissimilar <_<
I suppose that they didn’t do something like put the model for “mystery ship” in the game? Seems like someone would’ve attempted a rip if the movie wasn’t pre-rendered.

Well, Echoes had a ship that appeared only in a cutscene and they were unable to rip it because it was prerendered, so I assume this is the same way.